Discover the history behind my house in the Sierra – and why I am now renting out our treasure chest for short lets.

A charming house in the Sierra de Madrid for your holidays

This house in the Sierra de Madrid is ideal if you need to relax, want to write a book, or would like to get to know the country, its people and its culture.

How it all came about

My wife and I have always been attracted to nature and the mountains. Every weekend we travelled around Spain in our 1974 Volkswagen camper van. Our ideal place was the Sierra de Guadarrama, only 45 km to the north east of Madrid and 80 km long. It forms part of the Meseta Central, the great plateau that runs through the centre of Spain. Its highest mountain, Peñalara, is 2,428 metres high and is less than 30 km from where our house is. So we could go there even if we had little time. 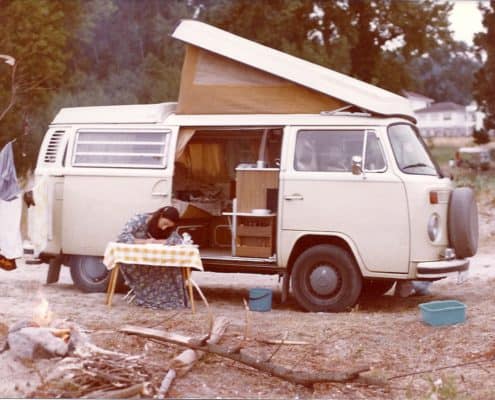 In Spain at that time we could go “wild camping”. These days, it is not permitted.

We especially liked the area of La Pedriza on the southern slope of the Sierra, a formation with a mixture of fascinating granitic outcrops and strangely shaped boulders. It is hard to find anything similar anywhere in the world. This is where the River Manzanares, which flows through Madrid, has its source. The preferred starting point for our trips, there was Manzanares El Real.

My wife had been hiking in the mountains with her older brothers, the boy who became her brother-in-law and a group of mountaineers since she was small. For me, these were the first real mountains that I had seen in all my life. I only knew low mountains ranges, like the Taunus, which is where I am from, and the Black Forest. There was no comparison! I remember my amazement when I went there with them for the first time, and my constant panting as we were climbing up, while my wife walked coolly along impossible paths. Later on, she confessed that when I looked at her she held her breath to impress me. :-)

When we reached our thirties, we talked about where we would like to “build our nest” some time in the future. We had bought a flat in Madrid because my wife is from Madrid and we were working and had friends and family there, but we were looking for something to make up for living in the city. We also wanted our children, when they came, to grow up in contact with nature.

That was why we went to El Boalo, a village 5 km from Manzanares El Real. And here, in El Boalo, we found a 1400 m2 plot of land covered in rocks and oak trees. The village had a lot of shops and a number of bars and restaurants that were worth trying. The countryside was lovely, and from there we could go straight up into the mountains. And it was a little over half an hour by car from Madrid. Perfect for us!

So, we bought this property in 1988. Financially, of course, it was an enormous struggle for us, as we were young and had just had a daughter. So, it is not surprising that we had to wait for another five years before finally being able to start building. However, we took advantage of this time to design our house. We spent five years drawing it. It had to fit into the landscape without destroying the natural lines of the plot and its rocks. 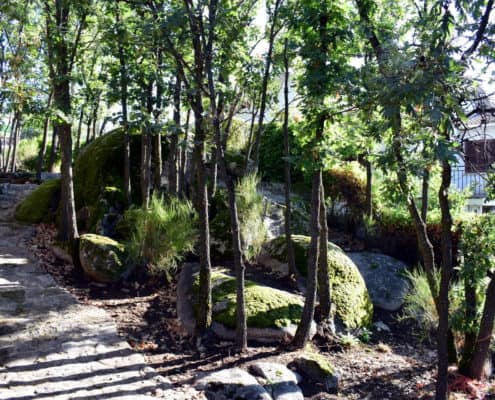 The egg after a rain shower

Some rocks and boulders even had names. We did not blow up the “egg”, for example, as the contractor wanted, so it is still opposite the kitchen today, and we can enjoy it every time it rains, with green moss on top and oak trees growing around it. In the first few years it was the lookout point for me and my little daughter from which we surveyed our “kingdom”.
Another rock was my daughter’s “horse”. We did not let anything get thrown onto the pile of rubble! Well, today we use it as a big stone table in the garden. :-)

Another condition was to cut down as few trees as possible. So, some 50 oak trees still stand around the house, which is barely visible from the north in summer. Other aspects to be taken into account were the view of the mountains and valley and the points of the compass. We oriented the house so that in the morning, when you go into the kitchen, you can see the rising sun. It then moves to the dining room, then to the living room, and lights up the downstairs bedroom before going down. When it sets, it lights up the corridor to the attic and the staircase, saving a lot of electricity. In summer, when the sun is very high and it is very hot, the sunlight does not enter the house, as on the south front we extended the overhang of the roof far enough to provide shade. However, in winter, the sun is lower and the sunlight does get inside.

At the time, before building, I had managed to get a Miele display kitchen at a reasonable price. Because of that, we adjusted the measurements of the kitchen and the placement of the windows to fit the cabinets.

In 1993 we finally started construction. The walls are built of natural stone (granite) from the region right up to the roof. That is unusual. Now, no more stone can be cut. It used to be common to use stone only for the first floor. Today, there are only a few stone masons able to build like this.

This is where the front door and kitchen will be

The roof is tiled with natural slate from Galicia. Thirteen tonnes of wood from the Laguna Negra area in the mountains of Soria were used in the house. For the most part, I planed the wood myself. In calculating the beams, I was helped by a carpenter and we selected the wood ourselves at the source.

At the end of the 80’s I worked for three years as a translator and interpreter on a civil engineering project. Because of this job, I was familiar with the applicable civil engineering standards and I therefore used the current DIN standard to calculate the insulation for the house. At the time, it was three times more strict than the Spanish standard. The village masons laughed at me and asked why I wanted so much insulation, if “no good came out of it”. But I wanted it so “nothing would get in”. The result is that today, despite the black slate roof, I can take a nap directly under it in summer without melting. My neighbours don’t dare to. But I had to be careful that the masons would not charge me more than the going price. To them, such ideas were the whims of a typical “crazy, rich uncle from America”, with whom you had to try your luck.

A lot of the interior finishing work I did myself. This saved us a lot of money but it also took us nearly 10 years to get a certificate of habitability and be able to live there. After all, I was only able to work on the house at the weekend. 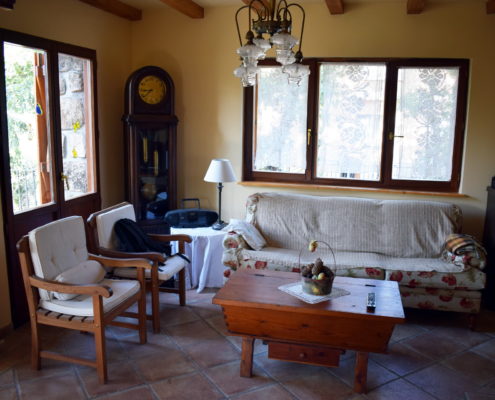 The old bread kneading trough as a coffee table

The house was lovingly furnished with a colourful mixture of furniture from different periods and places. Many of them were reminders of the past, to which my family and I cling. When the house was at a sufficiently advanced stage, I was able to ship the furniture that I had stored at my sister’s house to Spain. The shippers called it “bulky waste”. It was the living room furniture that my cabinetmaker grandfather had made and with which I grew up.
Among the furniture was a chest of drawers so strong that it survived a World War II bombing raid on Limburg and falling from the third floor almost intact. Only one trace of repair can be found on it, because at the time my grandfather did not have the proper materials to restore it. My father and I restored it again in the eighties.

To complete the furnishings, we bought mainly hand-crafted furniture from firms in various regions of Spain. And added a few pieces that we rescued from rubbish bins and restored. Many of the lamps came from flea markets, so that sometimes a lampshade was missing. Nothing matched. But almost all the pieces were linked to some personal story. The living room table, for example, was originally a box for kneading bread and leaving it to rise before baking it. At the time, the wood was in its natural state and not waxed.

Why are we renting the house?

There are two main reasons:

On a higher level, it could be said that, like “Rural Universities”, I want to contribute to the change of direction that present-day society needs. We need to go back to seeing and interpreting the world around us in order to transform it and take control again of our own history. That is why I started this blog.

As part of this project, the house can come to life again, recover its meaning and continue growing. One way to start is by inviting people to come here, and to give them a first look at the culture, the landscape and nature. Little by little, I intend to organise attractive cultural activities, seminars and courses.

Both these aspects require funding. This will come (partly) from renting the house. But as we also want to enjoy the house ourselves, we will not be renting it out permanently but for short lets. For the time-being, I have chosen Airbnb and FeWo to do this. You can book it wherever you feel more comfortable. The rental details are explained on those sites. If you are looking for a great, attractive setting for your projects, please send me an e-mail or phone me on +34 650-427-237.